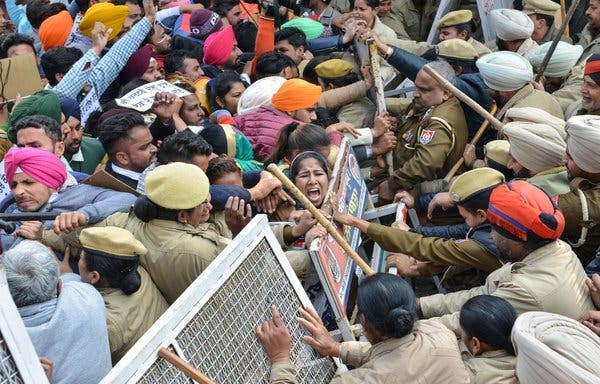 NEW DELHI — When voters swept Prime Minister Narendra Modi into power five years ago, it was in no small part because of his vows to create millions of jobs and vault India into an era of prosperity.

But now, just months before the next general election, Mr. Modi is facing a potentially troublesome challenge on the jobs promises that may be partly of his own making.

His government was accused on Thursday of suppressing an official report on the national unemployment rate that apparently showed it had reached a 45-year high in 2017.

The Business Standard, a respected Indian financial newspaper, published leaked findings from the unemployment report, which is based on a survey and produced by the National Sample Survey Office, a government agency.

There had been expectations that the report would be released in December. Two commissioners responsible for reviewing data in the report, who had advocated releasing it, resigned in protest this week.

Officials in Mr. Modi’s government scrambled on Thursday to blunt the impact of what amounted to withholding information that discredits the core of his economic record. The chairman of NITI Aayog, a government research organization, said the unemployment report was still in draft form, was not ready for dissemination and would be released in March. The response raised the possibility that the data could be revised.

But economists said the findings, if verified, were problematic for Mr. Modi, the dynamic prime minister whose popularity has always rested on his Hindu nationalism and promises to make India an economic powerhouse rivaling China.

Yes, thank you Jeffrey Gettleman and Hari Kumar. So much to learn. Here are two popular comments I endorsed:

I lived in Southern India (Kerala) and traveled throughout India. The country is a great example of the sad dystopia of overpopulation, fierce/ancient religious rivalries, income inequality, lack of infrastructure, Hindu nationalism, corruption at every level, and environmental destruction. Modi is a dangerous man. He’s a Hindu nationalist. He’s also a globalist who is selling off Indians and their ecology to the global corporate elite. He is in bed with Trump and Trump’s children in several development projects. His scandalous government smears indigenous people as “Maoist rebels” as a ploy to steal their land from them to hand it over to plunderers such as international logging, damming and mining companies. Climate change is coming in hard on India. Of note, Kamala Harris is also a Hindu nationalist and has endorsed Modi. Read the non-fiction book “Maximum City” and the fictional book “Shantaram” for a vivid depiction of modern India.

Thanks for a very illuminating article on India and how it has been ravaged by the incompetency of BJP party during its last 5 year stint. That the job growth rate would be dismal regardless of how we slice it was expected. The current ruling party has had no specific economic plan in mind to transform economically disadvantaged India; it simply basked in its own propaganda magic while young educated people began rushing in to join the behemoth of the unemployed ones. The party thought that foreign investment would lift India up, but potential investors stayed away at a comfortable distance. Modi can blame almost everybody for India’s lackluster performance except himself and his party. His party finds it difficult to understand how no foreign investor is willing enough to pump resources in a country beset with a steady stream of open communal threats from party top-braces, with frequent lynching, raping, burning and destruction of properties orchestrated by its rank and file. How could the country get out of such a mess? It cannot as long as it ignores the compelling physical reality in favor of its dream of transforming India to a Hindu nation.