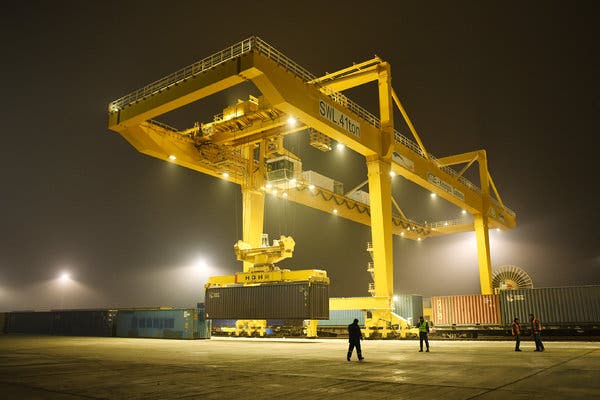 “The Eurasian Pole of Inaccessibility is a striking name for an absence. It is the point farthest from a sea or ocean on the planet. Located in China just east of the border with Kazakhstan, the pole gets you a good distance from harbors and coastlines — at least 1,550 miles in any direction — into an expanse of white steppe and blue-beige mountain that is among the least populated places on earth. Here, among some of the last surviving pastoral nomads in Central Asia, nestled between two branches of the Tian Shan range on the edge of Kazakhstan, the largest infrastructure project in the history of the world is growing.

About 80 miles from the Pole of Inaccessibility, just across the border in Kazakhstan, is a village called Khorgos. It has spent most of its existence on the obscure periphery of international affairs, and its official population is just 908. But over the last few years, it has become an important node of the global economy. It is part of an initiative known informally as the new Silk Road, a China-led effort to build a vast cephalopodic network of highways, railroads and overseas shipping routes, supported by hundreds of new plants, pipelines and company towns in dozens of countries. Ultimately, the Belt and Road Initiative, or B.R.I., as the project is more formally known, will link China’s coastal factories and rising consumer class with Central, Southeast and South Asia; with the Gulf States and the Middle East; with Africa; and with Russia and all of Europe, all by way of a lattice of land and sea routes whose collective ambition boggles the mind.

Khorgos is a flagship project of this work in progress, an international shipping hub and free-trade zone that its promoters say is poised to become the next Dubai. Thanks to its location at the junction of the world’s soon-to-be-largest national economy and its largest landlocked country, Khorgos has become an unlikely harbinger of the interconnected planet: a zone fully enclosed by the logic of globalization, where goods flow freely across sovereign borders, following corridors designed to locate every human being on the planet within a totalizing network of producers and consumers, buyers and sellers.”

Source: Can China Turn the Middle of Nowhere Into the Center of the World Economy? – The New York Times