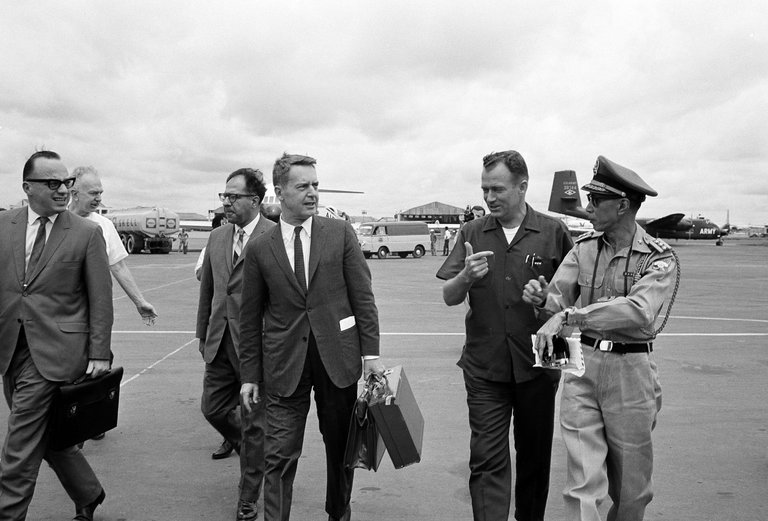 Edward Landsdale is on the left. NYT

“The Tet offensive, which began 50 years ago today and is remembered as the turning point of the Vietnam War, caught Americans by surprise. One of the few who saw what was coming was Edward Lansdale, the legendary covert operative and retired Air Force general who had helped to create the state of South Vietnam after the French withdrew. He had returned to Saigon in 1965 as an official at the American Embassy, trying to use his close ties to the South Vietnamese to salvage something from a failing war effort. . . “

Source: The American Who Predicted Tet – The New York Times

It is unclear whether the more subtle approach argued by Lansdale would have made a big difference. In 1858, the French invaded Vietnam, and it took them a year to win that first great battle. It took them till 1913 to destroy the last group of resistance fighters. They proceeded to exploit and rape the country for roughly 100 years, until the Japanese invaded during WW II, and the French surrendered without a fight. What also mattered was during 1931-33, the French colonial government announced an amnesty. The non-communist nationalist resistance groups came forward, believing the French, and turned in their guns. They were rounded up and executed. The communist nationalist resistance group did not trust the French, and did not come forward. After the massacre, only the communist resistance group was left to continue the fight against the French. During WW II, only Ho Chi Minh and his communist fighters fought successfully against the Japanese. He was aided with guns, supplies and money by the US OSS. He was our man in Vietnam against the Japanese. By 1954, when these Viets defeated the French, they were national heros, three times over. It is hard to believed anyone could undermine their national popularity. They had earned the mandate of heaven.