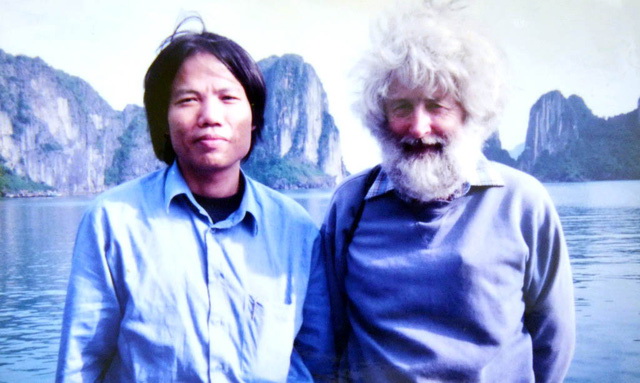 “In the late 1980s and early 1990s, students at ANU would use a mainframe computer for statistical work and related tasks. The personal computer, which was not powerful enough to perform such tasks then, was mostly used to type documents and send emails. Prof. Hurle shared his disturbance at learning that overseas Vietnamese students had limited use of personal computers, preventing them from putting what they had learnt in Australia into practice upon their return to their home country.

The nagging question prompted him to travel to Vietnam in 1991.

“I brought with me a hefty modem and gifted it to Pham Bich San, one of the Vietnamese students in Australia, so that he and others could connect to the mainframe computers in Vietnam more easily,” the professor recalled.

“Totally uninformed about Vietnam, I had not been aware that the bulky modem would be a burden, as computer engineers in Vietnam, who earned a mere US$20 per month, could hardly afford phone calls from Vietnam to Australia at $5 per minute,” he added.

This reality encouraged the scientist to devise ways to connect to Vietnam through an international phone toll of $2 per minute, which engineers in Australia, whose monthly salaries were approximately $3,500, could afford.

A few months later, Prof. Hurle returned to Vietnam and contacted an overseas Vietnamese in the U.S., who suggested that he approach Tran Ba Thai from the Institute of Information Technology in Hanoi.

“By then we had made strides in substituting the mainframe system with smaller yet higher-configuration computers adopting the UNIX system [a family of multitasking, multiuser computer operating systems] at ANU,” he added.

Prof. Hurle, Thai and a few other colleagues then embarked on experiments in connecting computers in Vietnam and Australia through landline phone lines.

The Aussie designed new pieces of software for the UNIX system, so that modems could be utilized to link computers in Vietnam by allowing users access to the UNIX system before they could connect to the Internet.

The experiments were a success.”