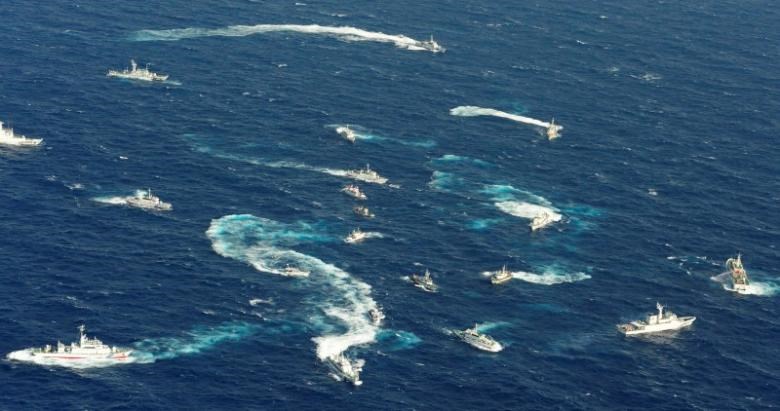 An aerial view shows Japan Coast Guard patrol ship, fishing boats from Taiwan and Taiwan’s Coast Guard vessel sailing side by side near the disputed islands in the East China Sea, known as Senkaku in Japan, Diaoyu in China and Tiaoyutai in Taiwan, in this photo taken by Kyodo in this file photo dated September 25, 2012.

The Japanese government said on Wednesday it is ready to provide Vietnam with new patrol ships, in its latest step to boost the maritime law-enforcement capabilities of countries locked in territorial rows with China.On Tuesday, Japan agreed to provide two large patrol ships and lend up to five used surveillance aircraft to the Philippines, another country at odds with China over sovereignty issues in the South China Sea.Japan itself has been at loggerheads with China over a group of tiny, uninhabited East China Sea islets.

Prime Minister Shinzo Abe told his Vietnamese counterpart, Nguyen Xuan Phuc, of Tokyo’s intention in their meeting on the sidelines of ASEAN-related meetings in Vientiane.Japan has already provided six patrol ships to Vietnam, but they were all used ones, a Japanese foreign ministry official said, adding that details such as the timing of the delivery and the number of ships to be provided have yet to be fixed.Japan plans to extend a low-interest loan under its official development assistance program to Vietnam to facilitate the acquisition.”