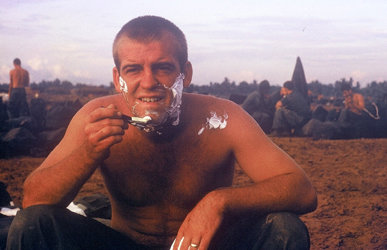 “The rest of the squad returned fire as best they could, but they were trapped. And Don knew it. Maybe Jacque’s parting words rang in his ears; maybe it was sheer instinct. But Don acted to save his friends. Shouting, “You guys run like hell, and I’ll cover you,” Don waited an instant before springing to his feet and opening up on the enemy bunkers with his M-16 on full automatic. The men of the Second Squad who could still move started their dash to safety, but only a few seconds later bullets hit Don’s midsection. He yelled, “My chest! My chest!” and toppled back into the rice.

For the rest of the day, the Vietcong and the remainder of Charlie Company fought over, around and through the battered remnants of the Second Squad. Charlie Company had a total of 14 wounded and one dead that day, while dead Vietcong littered the landscape, perhaps 100 in all — the fearsome cost of standing against American firepower. By any measure it was a clear victory for the Americans.”