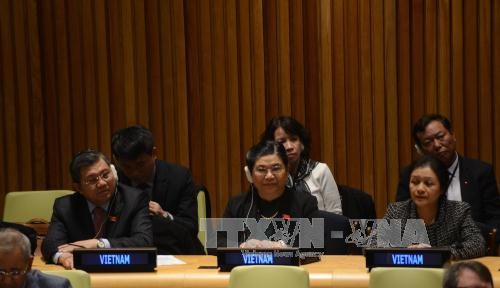 She noted Việt Nam is a coastal state, with an important position in the international waterway, adding that the country is also vulnerable to climate change, including sea level rise. She held that protecting maritime resources and environment is the shared responsibility of many countries, especially those owning financial strength and advanced technology. Amidst the imbalance of sea exploitation and environment protection that leads to serious consequences affecting sustainable development, Vice Chairwoman Phóng underlined that peace and security is the prerequisite condition for sustainable growth.

At the hearing, titled “A World of Blue: Preserving the oceans, safeguarding the planet, ensuring human well-being in the context of the 2030 Agenda,” she also made a number of proposals to ensure the harmony of sea resources exploitation and environmental protection, including the full implementation of the 1982 UN Convention on the Law of the Sea (UNCLOS) to ensure security and safety at sea as well as the settlement of disputes through peaceful measures in line with international law. ”