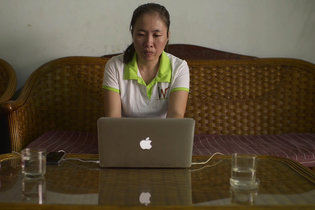 “HONG KONG — The authorities in Vietnam said on Tuesday that they had arrested a popular blogger who has criticized the country’s one-party government over politically delicate topics, including a dump of toxic chemicals that devastated fishing communities and set off protests.The blogger, Nguyen Ngoc Nhu Quynh, 37, was detained on Monday in Khanh Hoa, a south-central province. She was accused on Tuesday of distorting the truth and spreading propaganda against the state, according to the Vietnamese news media. The charges carry a maximum prison term of 12 years. No trial date was given.

Ms. Quynh, who writes under the pen name Mother Mushroom, is a co-founder of the Network of Vietnamese Bloggers, one of the few independent writers’ associations in Vietnam. The country’s news media and publishing industry are heavily controlled by the governing Communist Party, and writers who stray outside the system and challenge the party are frequently imprisoned under vague national security laws.Pham Doan Trang, a dissident writer in Hanoi and a member of the Network of Vietnamese Bloggers, said that the authorities might have arrested Ms. Quynh to intimidate younger bloggers who have been inspired by her online crusades — via Facebook and independent blogs — against corruption, social injustice and police brutality. But Ms. Trang predicted that the tactic would fail.“She has a lot of supporters,” Ms. Trang said of Ms. Quynh in an interview via Facebook Messenger on Tuesday. “Many of them will replace her or follow in her path.” ”