XIAOWUSILI, China — For all its economic might, China hasn’t been able to solve a crucial problem.

Soybeans. It just can’t grow enough of them. 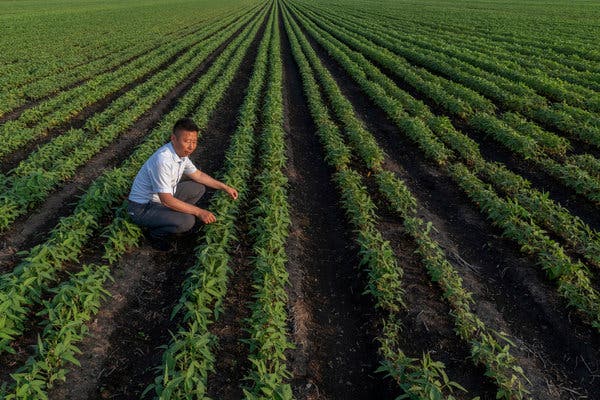 That could blunt the impact of one of the biggest weapons the country wields in a trade fight with the United States.

Beijing placed a 25 percent tariff on American soybeans last week in retaliation for the Trump administration’s levies on Chinese-made goods. Last year, soy growers in the United States sold nearly one-third of their harvest to China. In dollar terms, only airplanes are a more significant American export to China, the world’s second-largest economy.

Source: China’s Taste for Soybeans Is a Weak Spot in the Trade War With Trump – The New York TimesMay

David Lindsay:  Maybe. Here are the three most recommended comments, that doubt some of what this article says:

Although you say U.S. soybean producers “could take a hit,” you fail to realize they already have been hurt deeply and they suffer more each day this ruinous trade manipulation continues. Farmers need to be selling significant percentages of expected production throughout the growing season on futures contracts. This usually begins even before they have planted their crops in the spring. I grew up on a family farm in Nebraska and still am involved in its operations. (Each year, about half of our acres are planted in soybeans.) Commodity prices already were trapped in a low cycle before Trump’s disastrous trade moves. Farmers know how to deal with the usual ebb and flow that comes with such a long-range economic pursuit like farming. But then came the trade war that Trump says he wanted. Farmers now face these perilous conditions: Rising interest rates, decreasing land values because of falling commodity prices, and higher equipment costs and operating expenses because of other non-farm tariff threats by Trump. Our foreign grain markets, including but not limited to China, have taken decades to develop. All that work is being undone daily by Trump. The short-sighted focus of your story fails to take that into account — just as it appears the Trump administration has failed to truly understand the very nature of our farm economy or how rural America is affected by his actions. Shame.

Monsanto grows plenty of soybeans in Brazil, Argentina and Paraguay. I’m sure they won’t have any problem wiping out more of the rain forest to meet Chinese demand.

And when they do more American farmers can apply for food stamps. They might want to reconsider that work requirement for eligibility though.

The article seems to assume that the rest of the world produces no soybeans, but that is far from true. The biggest of the other exporters in Brazil. In fact, Brazilian farmers saw this coming and started expanding their plantings earlier this year.
They are also buying US soybeans at the great discount the trade war creates ($7.80), and selling them to other customers at the Brazil price ($10).

The competition is smart and well-informed.