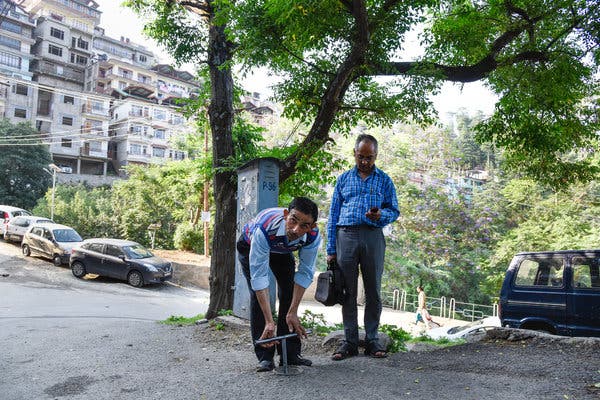 By Maria Abi-Habib and Hari Kumar

“SHIMLA, India — The people of Shimla haven’t agreed on much lately. A drought in the Himalayan resort has had residents blaming farmers, the tourism industry and one another for depleting the strained water supplies.

And everyone’s been angry at the key men.

Shimla’s decrepit network of water pipes, built under British colonial rule more than 70 years ago, depends on the civil servants known as key men to open and close the valves that supply each neighborhood. The current shortage, which in May left some homes without water for 20 days, has led to such fury toward the key men — accused, in just about every neighborhood, of depriving it of its fair share — that a court ordered police protection for them.

“I was getting angry phone calls calling me everything — stupid, worthless — at one or two in the morning,” said Inder Singh, 44, who has been a key man for 24 years. “I would be mobbed by dozens as I was trying to leave my home for work,” he said, inserting his key — a meter-long metal contraption — into the ground to open a valve.

Tourism is the mainstay of the economy in this mountain city, which the British colonial authorities made their summer capital so they could escape the brutal heat of New Delhi. But the drought — accompanied by unusually high temperatures, above 90 degrees Fahrenheit — has been so severe that in May, some residents took to Twitter to ask tourists to stay away and leave the water for local residents. Many in Shimla call it the worst shortage they can remember.”

Yes, thank you  Maria Abi-Habib and Hari Kumar and the NYT for excellent reporting. Here are some of the NYT comments I recommeded:

This is ALL about overpopulation.

Here is a prime example of overpopulation creating conditions where dwindling resources are strained to the breaking point.

About the only solutions are massive desalinization projects or cutting the population.

Meanwhile, the US government has been cutting funding for programs that encourage and enable easy access to birth control across the globe.

Here’s the result. Get ready for more and more stories of similar situations involving arable land, water and food shortages and spiraling death tolls as a direct result.

Drought and climate change set the teeth of displacement in motion in Syria. Mass migration to cities like Aleppo occurred which put extreme pressure on the existing infrastructure and jobs economy. This current wave of war and atrocity in places like Syria and Sudan are initiated by drought and famine. The oil wars were bad. The water wars will be so much worse.

It’s about over population AND increasingly inappropriate and/or arcane institutional arrangements for using water. Sections of North America and the US will come to similar situations as global warming intensifies. How sad that we “intelligent” humans can know what is happening and project what will happen, but seem incapable of acting effectively to avoid the collapse of not only civilization but the biodiversity of our beautiful and unique planet.

They are boxed in. Expect more loss of life and livelihood, social unrest, international conflict (no transboundary river and storage management) as Kali takes her toll.

This is only the beginning. The entire region is at fault. My sympathy is running as low as their decreasing per capita water supply.